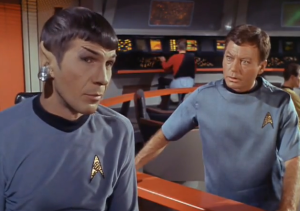 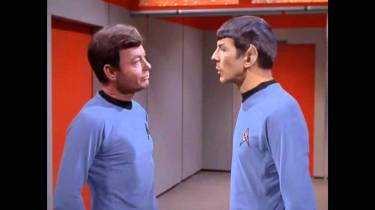 I don’t know if you are too young to remember Spock and McCoy.  Even if you are chances are, you’re seen at least one old Star Trek Episode in your life time.

We were watching the documentary about the 50th anniversary of Star Trek, and I was surprised to learn how low budget the whole project was (which explains some of the strange looking props) and also that the show was cancelled, (at one time) and many presumed it was doomed to fail. Yet, 50 years later, the show (as old as it is) goes on.

I was thinking why I liked the show so much, and this morning the constant bantering and even strife between Spock and McCoy came to mind.

“You green blooded hobgoblin,” Dr. McCoy once said to Spock. Spock was unflappable. He would raise his eyebrow, and most of the time remind the doctor, (in a very calm manner) Just how illogical his emotions are. I admired McCoy for speaking his mind, I admired Spock for being so unflappable. I admired the Captain for being so Brave, for never giving up, and for always believing the ship would make it, somehow some way.

Sure it’s just a show, just actors. But consistently, the teamwork and unity, and even yes, the obvious “Love” For each other the crew of The Enterprise displayed on this show, makes you wonder why some churches don’t watch it on Sunday morning and take some lessons from them. McCoy got upset at Spock for his seemingly not caring. Spock defied his emotional outbursts with pure logic. But you knew they loved each other. Anyone who watched the show for any length of time, just knew that.

They had their rules and guidelines, which came down from the Federation, but if someone was in trouble (one of their beloved team mates) The rules were bent a little bit. It was understood this was necessary, as the life of their friend mattered more, in some cases, than the rules did. The rest of the time, they followed the rules.

Spock and McCoy were hilarious! It was understood that The doctor has his passions, and I remember one time Spock Logically said “Your passions, doctor, may be your undoing.” However later, Spock (on more than one occasion) Demonstrates love by risking his life for the good doctor. Every character on this show was so obviously different, yet they worked as a team. Their concern and love for each other was obvious! And this is a television show! It all makes me think of the song…

“They will know we are Christians by our love.” Do we ever stop to consider, People are watching us? Just like Star Trek, (which was cancelled, and at first was not popular) we are going places where no man has gone before. People are watching how we handle it.

And if we are a team? SO much the better! Have a great day and remember “teamwork” is what gets the mission done, (or accomplished).   Laura Grace

Thank you for being here! I am called to minister hope and give encouragement to you, my friend! My journey in the Lord has been fraught with troubles, sorrows, dangers, and sometimes woes I am a very down to earth minister and would love to help, so if you have any questions or prayer requests please write me, I will respond to you personally. With Love, Laura I can be reached at sisterzeal@yahoo.com View all posts by Laura Grace